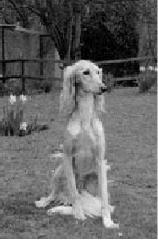 Ch Kasaque Eve
Born in February 1987
(Shamal Kharaz X Kasaque Dharmas)
Saluki Archives
Ch Kasaque Eve started life as a quiet puppy and grew into a youngster who was prepared to do things for people but stepping outside her comfort zone didn't come easily. Upon reaching adult status, Eve is always around the kitchen when food is being prepared but is otherwise quite retiring. When visitors come she is inquisitive enough to have a quick sniff and then return to her bed or trundle into the garden, unless of course an unwitting individual is prepared to share a snack or their whole meal depending on their eye hand co-ordination!

Eve was never a confident show dog but developed a method of survival. We believe this was based upon the rewards available at the Saluki or Gazelle Hound Club shows where sausages and other such items were handed out. Eve convinced herself that rewards were available at all dog shows and followed judges and stewards around the ring looking for her just desserts - so to speak! Between 1989 and 1994 Eve won four CCs, including one Best of Breed, four Reserve CCs and was runner up for the Lady Gardner Trophy which is a real claim to fame. In terms of CCs, Eve was somewhat in the shadow of her brother, Ezekiel, who was an exceptional hound and multi CC winner.


An example of Eve's temperament was apparent following a photographic session at "Comptonwood", Eve left the formal garden to find a quiet spot to recover from a stomach upset, caused by the stress of being a model. Eve may have many attributes but she is no Zsa Zsa Gabor
Some people feel that her name had certain advantages. Apart from being names after the first woman, the length of her name was somewhat shorter than is the norm in Salukis. Mrs. Anderson gave Eve the RCC at Richmond in 1990. Having struggled a little to write the lengthy name of the BCC on the card, upon learning Eve's abbreviated name, the judge, with much relief, thanked me profusely for thinking of such a practical and basically short name. I was hoping that she might reverse the decision regarding the CC and RCC winners, based upon our thoughtful choice of name, but unfortunately she didn't!

On the two occasions that Eve whelped puppies, she set up a defense system to protect her children, which turned the kitchen into a buffer zone and the whelping room a no go area, for all but the people and Eve's immediate family.
Although Eve was not head of the pecking order nor normally demonstrative in any way, not one canine member of the family had the nerve to question her authority, until those puppies were ready to leave home.
Two years ago Eve managed to injure herself rather badly by falling heavily on to a sharp spiked fence. The spike went into her chest, through her lung and touch e d her heart. Helen wrapped her to stop the external bleeding and rushed her to the vets. She suffered Pneumothorax, therefore she could hardly breath and lost a large amount of blood. However, due to immediate surgery and great care she survived and came home in days much to the surprise of all at the veterinary clinic, who had said they would do what the could but offered no promises of success. 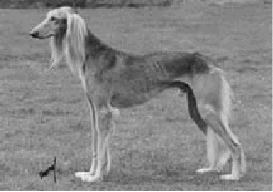