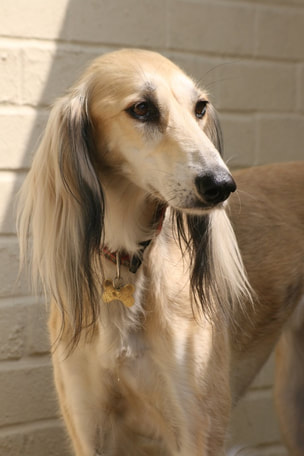 Co-owned with Rosemary Redfern and the late Daphne Tovey

8th January 2008  - 5th November 2018
Saluki Archives
The girl we kept from our very successful "N" Litter. We felt that Jimna and Lalique complemented each other very well and were pleased with the results. Most of the puppies have the calm gentle temperaments of the dad. Neeka was a very outgoing girl until about 16 months, then something happened to change her character. We have no idea what did happen, but after that she lost most of her confidence. She does have her friends, both male and female, and remembers them. For new people with a little effort she comes around and accepts them. Neeka is a queen and spends most of her time in high places with the World below her, as she thinks it should be.

Neeka is a beautifully sound bitch that gained her title with little effort. We did not push her, but showed her sparingly and as an adult I do not think she ever won anything lower than a RCC. Once she became a Champion we said she could stay at home, which she liked best.

To give you an insight into her character, on one trip we took Neeka to Scotland with us for attending a dog show plus visiting family. It was the only time we took her on an overnight trip. We stayed in a hotel at the motorway services with a view to the car park. All night long Neeka shouted that another car had arrived and we should get up. Never again.