​We are delighted to have Luachmhar Jadira join our
family.  She is the daughter of Kasaque Shabaz Nefisa out of
Vidana S Amira Berenga Turi (imp RUS)Sh CM Sh CEx
​thank you to Liana Phillips for allowing her to come live with us 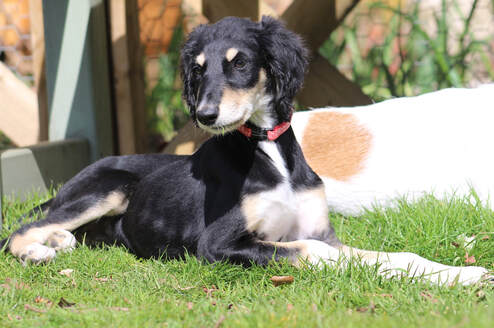 Jadira's show career is progressing well
She is a dream to show as she enjoys her days out .
​She has been awarded Best Puppy at Bournemouth thanks to Debbie Copperthwaite
Best Puppy at Richmond, Thanks to Lisa Hudson
Reserve best Puppy in Show NSC thanks to John Walton Haddon
​Best Puppy at Darlington thanks to Fran Mitchell. 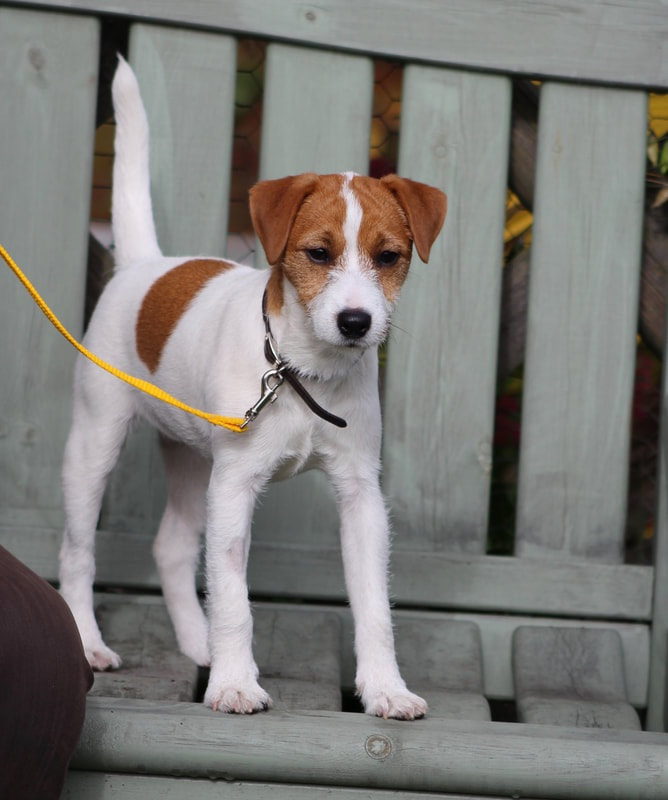 LKA
After a lull with out showing, we attended LKA  2019.
It was the first show for our stunning Parson Russell Terrier puppy
Alncroft Anabelle Kasaque, aptly handle by Jessica
​Smith.  Inspire of her puppy antics she placed 2nd in a large Minor Puppy Class
​qualifying for Crufts 2020. 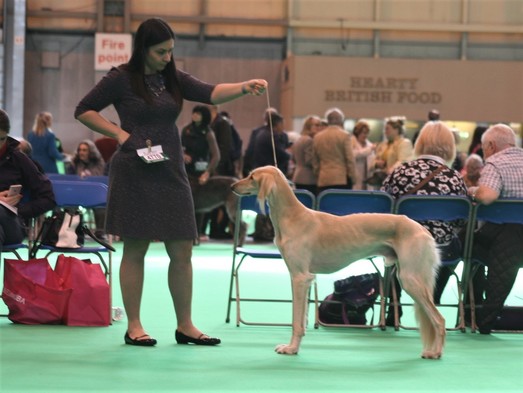 2011
SALUKI OR GAZELLE HOUND CLUB
CHAMPIONSHIP SHOW
Thanks to all the judges of the day we did not fare badly!

Judge Mrs Clair Chryssolor
Another much overlooked bitch whichI don't understand. The handler upped the ante with presentation and it worked. Almost gave a RCC as a pup then, as ever, watched her "go off" as a teen. Extremely hard muscled with no coarseness whatsoever. A fine and moderate bitch overall with a very feminine head leading to a long neck, strong shoulders to an excellent topline and rise over the loin. A deep chest with good fill in. Narrow feet, a wide second thigh with good inner thigh muscle, low hocks and didn't put a foot wrong moving as she moved so lightly around the ring. She maintained this throughout giving her her third CC.
VDH CHAMPIONSHIP 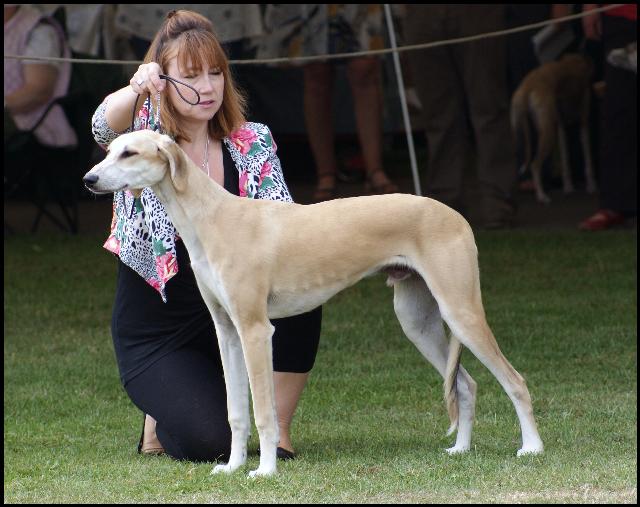 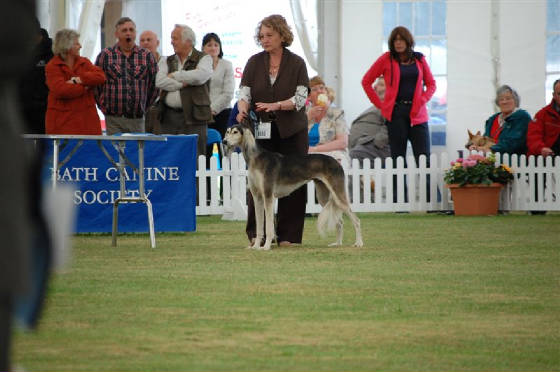 1st Open Bitch
Ch Kasaque Luzhana JW
"Apparently i judged this bitch as a puppy and did her well..she has certainly developed into a lovely bitch.
Nice head, good leathers and hazel eye.  Carried her neck well into good shoulders.
Nice outline, well bodied, good bone and excellent hindquarters which were well muscled.
This bitch flowed around the ring with such elegance.
Best bitch, BOB and short listed in the group"
Scottish Kennel Club
(Sunday 23rd May 2010)
Judge Mrs Shirley Rawlings 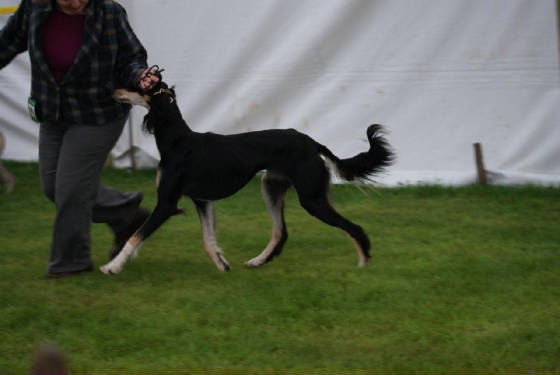 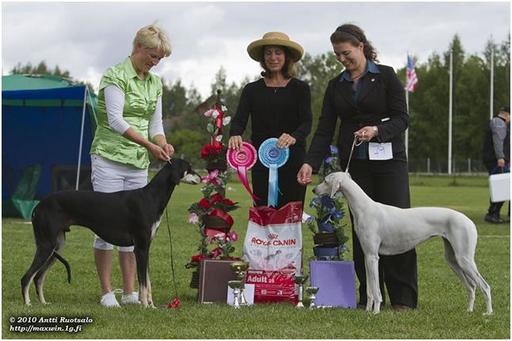 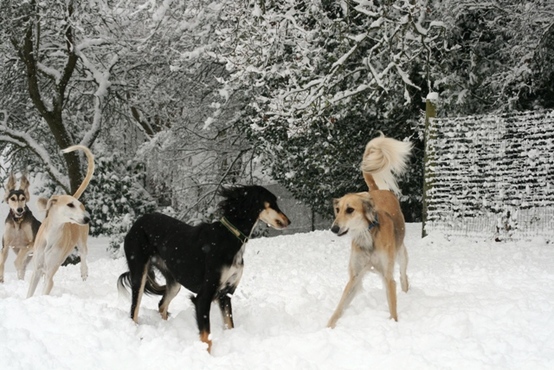 Salukis truly enjoying the worst weather the UK has seen for 20 years.
They are loving every moment of the snow and artic-like conditions.
2009
Crufts 2009
Judge Mrs Z, Thorn Andrews
Special Puppy Bitch:(8)
1 & BP - Williams, Tovey & Redfern's
Kasaque Neeka
Outstanding youngster of 14 months, she is full of promise throughout, good make and shape, well made and muscled, beautiful head and eyes and a sound impressive mover.  Sister to 2nd PD.

2nd.  Locke's
Kasaque Nashua
Could do with a slightly more angulated upper arm but also nicely balanced for height to length ratio, pleasing elegant outline too, and she  moved well for her age. Another sister I see.

​Special Junior Bitch: 2nd
Kasaque Miracle
Sound mover and very well muscled up, nice proportions, good legs and feet, very promising but today did not quite have the lightness in movement that the winner displayed.
LKA
Judge Mrs P Kendall

2nd Puppy Bitch Locke's
Kasaque Nashua
Very similar to her litter sister and having all her attributes.
Not qute so focussed as her at the moment on the move, but on another day could change places.

Caspians L'aliq avec Kasaque
First new smooth champion in the UK in 11 years!
Hooray Lalique we knew you could do it!!  Thanks to judges Kevin Carter, Norman Ziman and Liz Stephen. 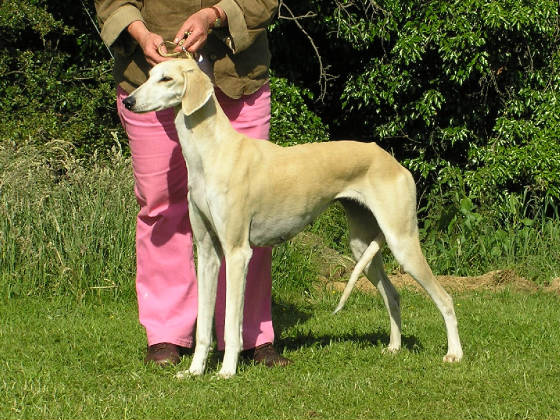