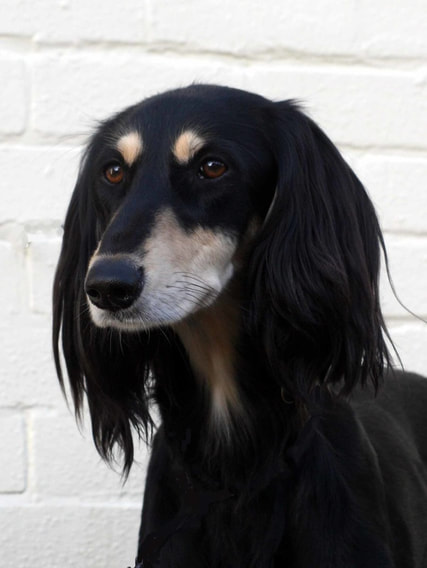 Saluki Archives
Miracle was a singleton puppy out of Pearl (Kasaque Jarvah). The veterinarian who pulled her out of Pearl's belly weighing 5 ounces suggested to Helen that she should not have too much interest in her showing career. Well we showed her selectively and finished up with 11 Challenge Certificates and 25 Reserve Champion Challenge Certificates. Cannot imagine what she would have finished up with if we had decided to campaign her competitively at all the Championship shows.

Miracle's breeding goes back to the old English lines, which we are very pleased about. We wondered how she would compete and compare with the Continental Salukis when we attended the German Sighthound Show in Donaueschingen in 2015. Pleased to say that Miracle's attributes of a classical body with very sound movement was rewarded on both days. Viva Miracle and thank you to  all those people who commented on her that day.

As a Veteran, we are having fun taking Miracle with her daughter Salaama to shows. We have attended about 5 shows this year and Miracle has won all her Veteran classes, plus she accumulated another couple of RCCs and RBIS at the SGHC Open Show. She is great fun to show and as one judge put it, "has no one told this dog that she is a veteran?"
Miracle attended her last show, The SGHC Championship Show, before her retirement at 10 years of age.  Breed judge Karen Fisher.
She was awarded 1st in Special Veteran, RCC, Best Veteran in Show.